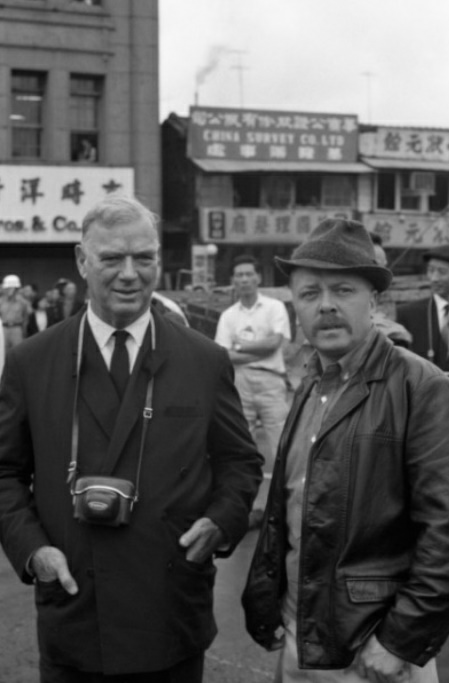 To the right: A photo of the late General James Van Fleet (left) released by the Korea Health News on the 23rd. Provided by Stars and Stripes.

A photo of General James Van Fleet, who participated as the commander of the U.S. 8th Army and commanded the U.S. military and UN multinational forces during the Korean War, was recently released.

The Korea Health News announced on the 23rd that it found a photo of the late General James Van Fleet in an old issue of the U.S. daily "Stars & Stripes" while searching for some data to remember the sacrifices of the U.S. and other UN forces participating in the Korean War.

The late General James Van Fleet was a four-star general in the U.S. Army who also served as the commander of the U.S. 8th Army and the U.N. Army during the Korean War. He was fondly referred to as the "father of the Korean Armed Forces" because he led the reconstruction of the Korean Military Academy to modernize the Korean Armed Forces even during the war.  In particular, there is a well-known anecdote that Captain James Van Fleet Jr., the only son who participated in the war together, went missing during the battle, but he stopped searching for his son to prevent further sacrifices.

At the end of the war, despite the U.S. government's announcement of the "end of the war through negotiations," he firmly refused to cease the war and remained on the battlefield to the end.

At the time, he said, "If communists succeed in a truce at no cost this time, democratic countries, especially the United States, will suffer from nightmares for centuries." And this remained lived on in the history of the Korean War, which was left as a ceasefire for nearly 70 years.

In the photo released by the Korea Health News this time, the late General James Van Fleet wore a suit and a camera around his neck. His picture in a suit, not a military uniform, is considered one of the important historical sources of the general. However, the timing and location of this photo are not known.

Jang Jin-seok, publisher of the Korea Health News, said, "It is natural to express gratitude to those who have laid the foundation for the development of Korea and the healthy lives of Koreans now," adding, "We will also take the lead in various activities to remember and not forget their achievements at the national level."

The Korea Health News unveiled the “We Are All Van Fleet” campaign with medical tourism startup U-MEDI last month and has been collecting historical data to remember the sacrifices of the U.S. and UN multinational forces participating in the Korean War.

0 0
Periodic ventilation is essential in the season of allergic rhinitis If you have arthritis, you should be careful using step machines
List